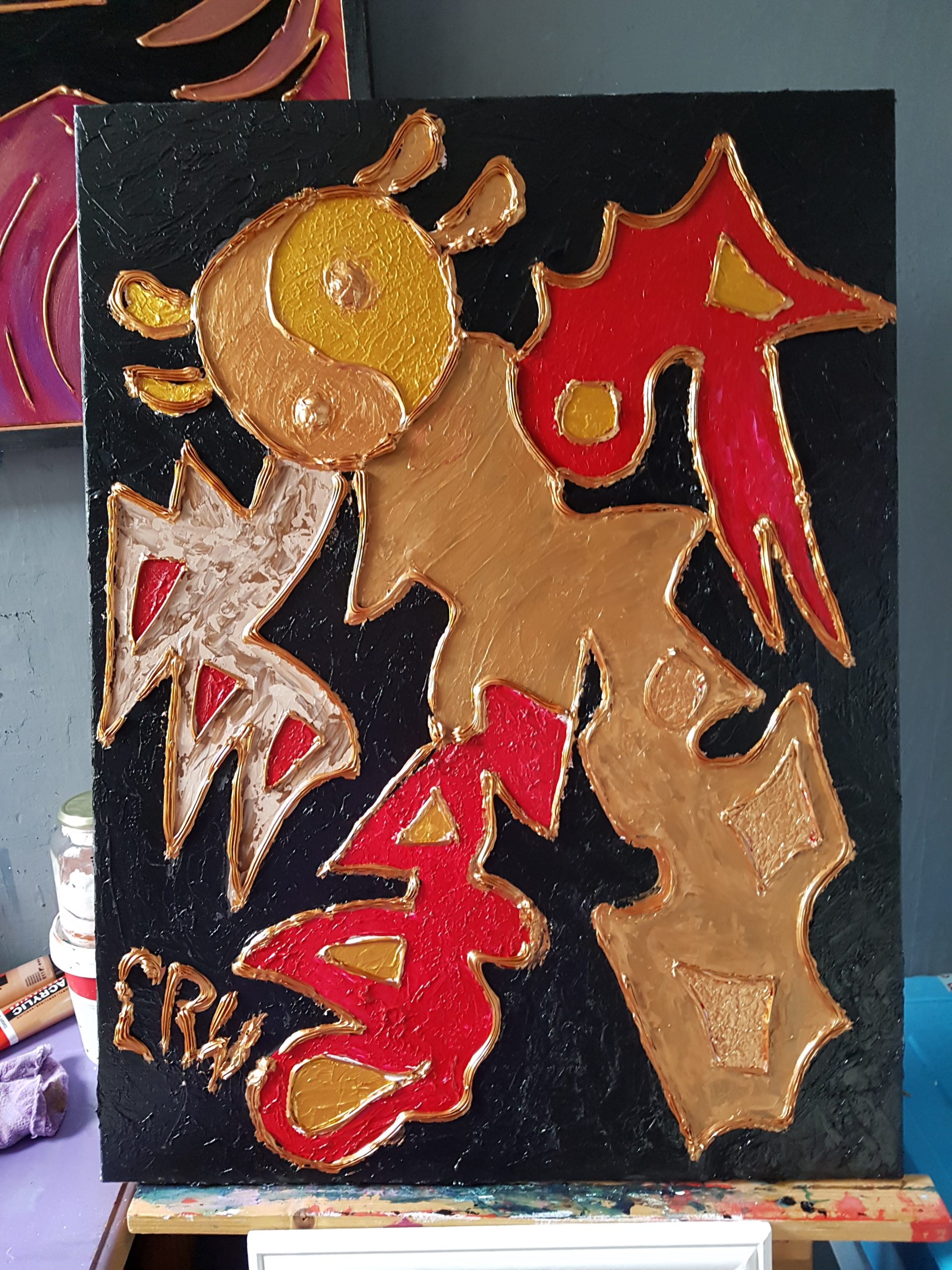 The art of LaReina Willeke

I use elements from real live though as motives in my paintings.

Could be human or animal figures, flowers, buildings, mountains or whatever comes in my mind when I start my first sketch on the canvas.

I try to create a balance in my painting using forms, colours and composition.

I use primary colours but also mixed colours and also bronze and gold.

I feel a painting and I don’t stop till I feel it’s okay.

I stop when I feel that the painting is in balance.

I mostly already have some vague idea about what I have in mind when I start a painting.

Sometimes I get an idea about a person I met or saw.

Or sometimes I get an idea about something human or human interaction.

I look for things I can use as motives in my painting.

I can’t just simply copy a vase with flowers or a cow or dog or person.

That doesn’t give me any inspiration at all.

Inspiration for me mostly comes from human interactions, what human beings do to each other.

That yields me emotions and my emotions mostly trigger my inspiration.

The inspiration shows itself while I work on my painting in the way I use my materials and colours and I compose the motives in to a composition on the canvas  I like.

I can get my best ideas out of the blue.

Not necessarily when I’m depressed or feeling bad.

Sometimes I walk around with an idea and then it might take a while before it’s actually so far developed in my mind that I start doing it, I mean start making the painting.

I don’t think anyone can say when best ideas come to mind.

Personally feelings play a great part when I get my ideas.

I don’t actually evaluate whether an idea is good or bad.

An idea is just an idea to start painting.

Once I’ve started the painting I go on till I feel it’s finished.

And then I can get a bad feeling about it and start changing it.

Ideas can be important as to motivate yourself to start painting.

When you paint figurative and have something, an idea, in your mind which you have to draw in details it must be different.

In the way I paint and create my paintings that’s less the case.

But I guess that you can only evaluate your idea when the painting is finished.

If it’s bad maybe it’s because the idea was lousy.

If it turned out beautiful then maybe your idea was good, ha,ha,ha!

I don’t have a specific message.

Or maybe a message could be in some paintings I make when I am inspired by what humans do to each other.

But then I can only hope that the viewer can see that “message” hidden in the painting.

I do hope that the viewer gets feelings while watching my paintings and hopefully that they like my paintings.

Behind my work often hides a feeling.

A feeling about someone I saw, or a situation.

These feelings give me thoughts, ideas, contemplations and above all emotions.

I use form, colour and composition to express my emotions into my paintings.

Besides that, I make paintings in wich I try to create a colourful and positive atmosphere.

In such a way that a painting by LaReinaWilleke can be a nice addition to decorating your home or company.

All my paintings are unique.

I use acrylic paint and modellingpaste.

Characteristic for all of my paintings are high-relief style because of the modellingpaste I use and the bronze and goldpaint used.

I started painting some decades ago and had to learn to develop myself.

And I mean artistically and that’s mostly an inner and intuitive process.

In doing so I found that I slowly began to see myself as an artist when I noticed that what I was doing, what I was creating on the canvas, became better.

I noticed that because people, strangers, began to like my paintings.

That was an eye-opener.

So actually you can not really see yourself as an artist.

Other people see you as an artist.

When other people tell me I’m artist I feel flattered.

Making art is an emotional thing.

It involves your emotions.

The creative process is the opposite of the cold analytical thinking process.

If you’re really deep into making, creating art, then you become emotional.

It influences your personality.

As an artist and painter I am sometimes really caught or driven by my emotions while I am painting.

But when I don’t do that I can easily think in an analytical way.

But as an artist I might be a little more impulsive than other people perhaps.

If you look up the definition of “postmodern” in Wikipedia you get three different definitions and descriptions in the English, German and French version.

That’s to illustrate that it’s not even possible to define uniformly such a period, direction or style in art history.

That’s only important if you yourself wish to be placed into such a box.

If that matters to you as an artist.

It doesn’t matter to me personally.

I’m not busy rationalizing my artwork.

When Van Gogh was alive all art-scholars thought him to be a lunatic and bad painter.

Even the Dutch who maybe a century later built a special museum to honour him and now call him an icon in art history.

So I don’t bother to get into the type or sort of “school”, “direction” or  “style” I belong or don’t belong.

I make my own art in my own way.

How should art be evaluated?

You must first define what art is and that might be more complicated than at a first thought.

Art is something subjective.

It is subject to the personal taste of the one who observes a work of art.

And those artists all painted in a different fashion.

In the old days there were strict rules for composition and perspective.

Figures had to be positioned in a specific way on the canvas and that would be the correct way and the same counts for the rules of perspective.

You can do it right or do it wrong and when you do it wrong it might be intentionally done so by the artist.

So how to judge whether a work of art is good or bad?

Maybe it’s just the “click” you get when you watch an artwork.

Something that gives you this “wow-feeling”.

Think of a soccer match and imagine how 22 players run across the field after a ball.

And among them one player attracts attention, because of the way he moves, the way he plays the ball, so graciously.

He doesn’t even run fast, doesn’t score much.

But when you see him play there’s something that makes him rise high above the other players.

It’s the  “click” you get when you watch him play.

It’s an indefinable quality that makes it a pleasure to watch him.

That’s how you perhaps can evaluate the work of an artist.

Look for the “click” or the “wow-feeling” or that “undefined quality”.

I hope that among my paintings there will be works that will give people such “wow-feelings”!

Wow, Art is so subjective. What is art to one person maybe junk to another.

It depends on what style and direction in art you are.

There are dozens of totally different art-style and directions in art.

People who like pastel colours may like the impressionists but may dislike the work of Paul Klee or Jackson Pollock. It’s all about the personal taste of people.

There is no precise definition of what “art” is.

Art can trigger emotions in the hearts of people.

Or people can just try by cold mental reasoning to find an explanation for themselves when they watch a modern artwork they don’t understand.

For one person art can be emotions and for another person the philosophy behind the artwork is more important than the artwork itself.

Art could well be emotions!

To me art is emotions.

As an artist I try to develop myself and evolve.

You can’t stand still, you have to move on.

Your ideas, your techniques, the way you work, your artistic instincts, intuition, everything.

If you stand still you’ll deteriorate or at least your artistic abilities will I think.

If you create art it must be a definite “yes”.

I mean, food, water, clothes, a roof above your head are basic necessities.

If you’re an art lover you might also say “yes”.

Art and culture are necessary.

I’m an artist and I know there are people who really don’t care at all about art.

They consider an illustration from a children’s book to be “cute”.

They have no notion of and no interest in art.

Just to keep things in balance art is necessary.