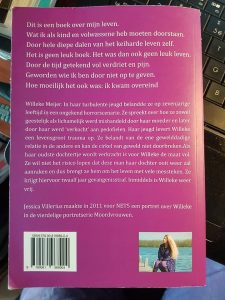 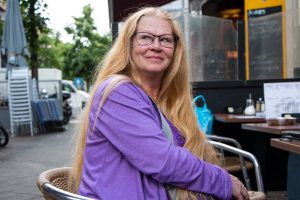 On the 12th of June 2010 a group of bikers organized a ride-out in honour and remembrance of Milly.
They gathered and drove on their bikes to the house where Milly lived.
Artist LaReinaWilleke and artist/singersongwriter Ron Lindeman were asked to make a painting in honour and remembrance of Milly.
The painting was presented to the parents of Milly at the end of the ride-out.
Ron  Lindeman wrote a song especially for this occasion and called it “Song for Milly Boele”.

The 52 year old Willeke Meijer, herself a victim of pedophiles, explains what kind of consequences this can have for these young victims at a later age. ‘Contrary to what is sometimes heard in the media: how young the victim yet is, it is inside of you and remains present in your entire being. And once you recognize that pain, that fear, years later. As a victim of pedophiles you are condemned to a life sentence. Physically you do not die, but emotionally and mentally you die bit by bit. That piece of death you carry with you in your soul for the rest of your life’ The life story of the woman born in Rotterdam is heartbreaking. Between her seventh and eleventh year she was rented out to pedophiles by her mother. When her own young daughter was raped by a pedophile she murderd the perpetrator . She was in prison for twelve years, but she does not have real regrets “I have never felt it as a crime, more of a retribution for what has happened to me and to my little daughter”. As an expert by experience with pedophilia and meanwhile a grandmother, she calls upon all victims of pedophilia. ‘Whether it has happened recently or is still happening or whether it has happened already a longer period of time ago. Put yourself over the shame. Make it known. Make it known that it is enough.’ The original footage is available in HD, for usage contact the editors. The video on youtube and DailyChannelTV is free to embed on your site. More info: redactie@dailychanneltv.com

Welcome on my site :-) You can see my artworks, poems,pictures,media and lost more.